Al Ain: Almoez Ali was the star of the show on Sunday afternoon as he scored four and set up a fifth in Qatar’s 6-0 defeat of DPR Korea as Felix Sanchez’s side moved to the top of the Group E standings and into the knockout stage of the AFC Asian Cup UAE 2019.
The Al Duhail striker, now the tournament’s leading scorer with five goals in two games, shone as his partnership with Akram Afif down the left destroyed the DPR Korean defence repeatedly while Boualem Khoukhi and Abdelkarim Hassan also put their names on the scoresheet.
Victory means Sanchez’s side have secured themselves a top two finish in the group and their win also ensures Saudi Arabia will progress to the last 16. The teams face off on Thursday to determine who will top the group, with Qatar’s huge win meaning a draw in Abu Dhabi will be enough to take pole position.

After labouring in the opening hour of their 2-0 win over Lebanon, Qatar were taking no chances against DPR Korea, with Sanchez restoring the influential Hassan to the starting line-up and the West Asian side possessed a greater level of urgency as a result.

Within nine minutes the Qataris were in front as Afif glided past Sim Hyon Jin before delivering a low cross to Ali that he controlled with his right before stroking past Ri Myong Guk with his left.

Two minutes later and Qatar doubled their lead, with the threat this time coming down the right. Hassan’s sweeping ball found Hassan Al Haydos, the Qatar captain, and his low centre gave Ali the perfect opportunity to strike from close range. Once again he was clinical, netting for the third time in the tournament.

A string of yellow cards for Ri Un Chol, Jong Il Gwan and Ri Il Jin suggested DPR Korea were about to lose control, but eventually Kim Yong Jun’s side settled and almost pulled themselves back into the game. Ri Un Chol tried his luck from outside the area and his right foot drive only narrowly failed to find the top corner.

That, though, was to prove a brief bright spot in an otherwise disappointing half for DPR Korea. With just two minutes remaining, they found themselves further behind when Afif lifted the ball high over the advancing Ri Myung Guk and Khoukhi headed in from close range.

Qatar refused to relent as they sought to boost their goal difference ahead of their crucial meeting with Saudi Arabia, with Ali completing his hat trick 10 minutes into the second half with an easy finish after Afif’s perfectly weighted through ball.

The 22-year-old added further misery for DPR Korea five minutes later when he linked up again with Afif, who led a rapid-fire counterattack for the Qataris before rolling the ball through to Ali and he smashed his shot across Ri Myung Guk and inside the far post.

Ali turned provider in the 68th minute when his pass allowed Hassan to storm through the DPR Korea defence and slot home Qatar’s sixth and the east Asian side’s misery was compounded in injury time when Jong Il Gwan was sent off for second bookable offence.

Isa Town: Bahrain's buildup to the AFC Asian Cup UAE 2019 received another boost as they defeated DPR Korea 4-0 in an international friendly at the Khalifa Sports City Stadium on Saturday.
Bahrain, who will play hosts UAE in the opening match of the Continental showpiece on January 5, took the lead through Mohammed Al Romaihi in the ninth minute.
Ahmad Jumaa doubled Bahrain's advantage in the 35th minute.
Jamal Rashed added the third for Bahrain, who defeated Lebanon 1-0 in a friendly on December 26, in the 65th minute before Kameel Al Aswad sealed an emphatic win for Miroslav Soukup's side just a minute later.

The win was Bahrain's third on the trot, having beaten Tajikistan 5-0 in a friendly on December 20 and they will head to UAE 2019 confident of making a mark.

After UAE, Bahrain will play Thailand on January 10 and India five days later in their bid to advance to the knockout stage in their fifth consecutive AFC Asian Cup appearance, with their best finish being fourth place in 2004.


DPR Korea, who will play in Group E, open their AFC Asian Cup UAE 2019 campaign against three-time champions Saudi Arabia on January 8. They will then face Qatar on January 13 and Lebanon four days later.


NDO – Forward Tien Linh was on target as Vietnam were held to a 1-1 draw by the Democratic People’s Republic of Korea (DPRK) in a friendly football match at Hanoi’s My Dinh National Stadium on December 25.

The Becamex Binh Duong striker put Vietnam in front ten minutes into the second half, only to see his efforts cancelled out a few minutes before the final whistle thanks to DPRK captain Jong Il Gwan.

The “Golden Dragons” enjoyed the first opportunity after just three minutes, but Tien Linh failed to produce a shot following a favourable pass from Minh Vuong in the penalty area.

The guests successfully found the back of the net in the 24th minute as Jong Il Gwan took a through ball from a teammate and beat Vietnamese goalie Tuan Manh with an unstoppable strike; however, his goal was ruled offside by the referee.

Vietnam created a few chances to break the deadlock in the last 15 minutes of the first half, but they were squandered by Minh Vuong and Xuan Truong who produced shots over the crossbar and narrowly off post, respectively.

After half time, Park Hang-seo began to make change in terms of both lineup and tactics, as he put Duy Manh, Hung Dung, Que Ngoc Hai and Bui Tien Dung onto the field in replacement of Thanh Chung, Huy Hung, Van Hau and Tuan Manh (goalkeeper).

The opening goal arrived for the “Golden Dragons” ten minutes into the second half, as Cong Phuong chipped a through ball to Tien Linh who dashed into the box and finished off DPRK goalie Ri Myong Guk to secure the advantage for the home side.


With time running out, Vietnam created a few more clear-cut chances to double their lead, but none of them were converted into a goal.
The waste of opportunities forced Park’s troops to pay deerly, as DPRK skipper Jong Il Gwan took advantage of the 82nd-minute freekick to equalise the score with an eye-catching curler towards the top corner.
The friendly match against the DPRK at My Dinh Stadium is one of two international friendlies of the Vietnamese squad ahead of their 2019 Asian Cup mission. The “Golden Dragons” will “reunite” with the Philippines team in the other friendly in Qatar on December 31, before commencing their continental campaign with the opening match against Iraq on January 8.
http://en.nhandan.org.vn/sports/item/6997002-vietnam-draw-with-dprk-1-1-in-int%E2%80%99l-friendly.html
kl. 00:40 No comments: 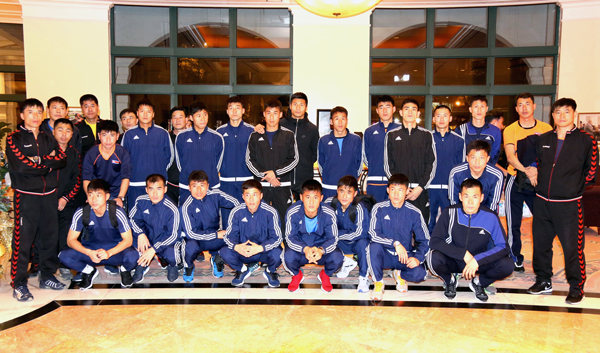 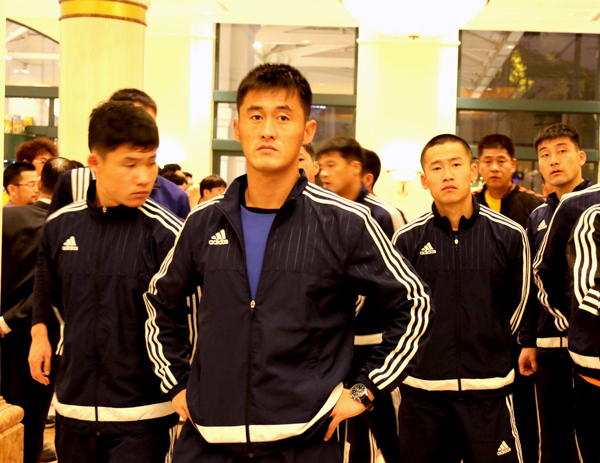 Needing just a point to guarantee their progress to next January’s finals, first half goals from Jong Il-gwan and Pak Kwang-ryong sent DPR Korea on their way to collecting all three points and ending Hong Kong’s hopes in the process.


Hong Kong needed to win to qualify for the Finals for the first time since 1968, but the visitors’ hopes were hit early by the loss of defender Helio Goncalves, who was replaced just 11 minutes into the game by Tong Kin-man after sustaining a knee injury.


The home side took command just seven minutes later when Jong’s strike beat Hong Kong’s Yapp Hung-fai from 25 yards, with the Hong Kong goalkeeper unable to keep the ball out despite putting a hand on the shot.
Six minutes later DPR Korea doubled their advantage when left back Kim Chol-bom drilled the ball across the Hong Kong goal and Pak was on hand to steer his shot home from six yards out.
Hong Kong finally sparked into life, with Alex Akande sending a pair of efforts just off target in the minutes before the half-time break, while second half substitute Lam Ka-wai gave the visitors some encouragement after his introduction.

Liu Chun-fai’s side was unable to find a way through the well-drilled DPR Korea defence and, with a little more than 10 minutes remaining, Ri Yong-jik almost added a third for the hosts only for his long-distance lob to just miss the target.
It mattered little, however, as Andersen’s side closed out the game to give the Norwegian a victorious send-off in his final game as coach as the country secured their qualification for next year’s Finals.

DPR Korea sit in second place in Group B behind already-qualified Lebanon and three points ahead of Hong Kong meaning a draw will be enough for the east Asian nation to secure a spot at the Finals for the third tournament in a row.
“After almost two years as national team coach for the DPRK, we will play the last AFC Asian Cup qualifying match against Hong Kong on Tuesday,” said the Norwegian. “It will also be the last match for me as coach of this team.
“My contract will finish on March 31 and I will leave the country, so we hope for victory and a positive finish.
“After playing a very good tournament in December in Tokyo in the East Asian Championships, we have seen that this DPRK team is almost at the same level as Japan and Korea Republic, the best teams in Asia.
“My team has taken a big step and they have a lot of confidence ahead of this match against Hong Kong.”

The two nations met in Hong Kong in June with the teams sharing the points in a 1-1 draw at Hong Kong Stadium.
That, coupled with a narrow win over Hong Kong in the qualifying rounds for the East Asian Championship in 2016, has ensured Andersen is not underestimating Tuesday’s opponents.
“I think after the last two matches against Hong Kong, the teams know each other well,” he said. “We know that Hong Kong have a good team with many foreign players, who are physically very strong.
“Also, we know the situation for us is very good. If we don’t lose the game we will qualify for UAE 2019.

Hong Kong are attempting to secure a spot at the Finals for the first time since 1968 and have travelled to Pyongyang without Tan Chun Lok and Sandro, who are both suspended.
But striker Jordi Tarres is available after shaking off an injury and the Kitchee man believes the team will have no issues with the cooler conditions or the pitch at the Kim Il-sung Stadium.
“We have started to get used to the style of artificial grass we will find in DPR Korea and we are focused on the game and have been preparing as well as possible from the first day,” said Tarres.
“I prefer it being a little bit colder rather than the heat. When you have to run, the heat is worse but when it’s eight or 10 degrees then you feel as a player more comfortable, so that’s good.
“I think the game will be like a chess game. We need to read the game and put on the pitch what we need.
"We need to avoid conceding a goal early in the game and try to keep a clean sheet and then be patient.
"I’m sure we will have several chances and we need to take these chances and come back happy to Hong Kong.”